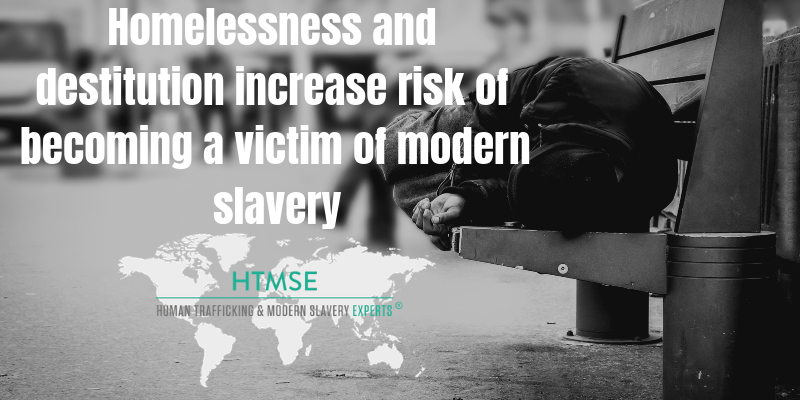 A
Significant links can be found between modern slavery, human trafficking and homelessness. In 2017 the Independent Anti-Slavery Commissioner‘s Office published a report entitled ‘Understanding and Responding to Modern Slavery within the Homelessness Sector’, which followed a 2016 exploratory survey conducted in conjunction with the homelessness charity ‘The Passage‘. The main findings, which have since been re-published in The Passage’s 2018 Anti-Slavery Handbook, primarily suggested that those who are homeless and destitute are at significant risk of exploitation, and those victims of slavery are at risk of becoming homeless without proper provision of long term support strategies; accommodation has been identified as one of the most pressing provisions required for victims of modern slavery by other homelessness charities.
A
The report found that:
A
“… the majority of homelessness organisations (64% of survey respondents) have, to varying degrees, encountered potential cases of modern slavery…” (p.10)
And that whilst there is a degree of recording and there is certainly some awareness of the problem:
A
“ …data on the numbers of potential victims of modern slavery [within the homelessness sector] is lacking or unreliable. This is either a result of a lack of recording or of a lack of information” (p. 10)
A
Aside from the issues in reporting, which were noted as needing improvement in their accuracy and reliability, there was a clear need from the report that greater co-operation was required across different agencies to comprehensively tackle the two overlapping issues. One of the current issues noted by the report is that the National Referral Mechanism (NRM) required reports to come from a designated first responder, which most homelessness charities are not. This causes unnecessary delays, as noted by the report, and clearly demonstrates the need for multi-agency responses, or reforms to the NRM so that a broader spectrum of organisations may act as first responders for a crime that can effect anyone from any background.
A
Since the report there have been a variety of handbooks and advice documents produced specifically targeting the issue of homelessness and modern slavery;  from both Non Governmental and Governmental organisations, for a wide range of groups and organisations that may come across modern slavery in the homelessness sector, targeting both homelessness resulting from modern slavery or slavery resulting from homelessness.
A
Given the vulnerability of homeless individuals becoming victims of modern slavery, and the risk of slavery victims becoming homeless, the importance of multi-agency responses to both issues to avoid situations where individuals undergo continual cycles of exploitation is clear.  As such, more research into the overlap between homelessness and modern slavery, both in terms of the nature and extent of the overlap and the effectiveness of responses, is greatly required.
A

Links to the full report and a short summary of the findings can be found on our e-learning page here.