Worldwide sub-contracting is the hallmark of 21st century business, and the fashion industry has been no exception to this trend – having paid in human costs what it gained in monetary benefits. The 2013 Rana Plaza collapse, having claimed over 1,100 lives and injured 2,500, remains to this day the most dramatic and opportune illustration of the pervasiveness of modern slavery in the garment industry.

Boasting of 60-75 million workers worldwide, international textile supply chains are, whether to the knowledge or obliviousness of international businesses, riddled with forced and child labour. As a result, many clothes sold by high-street brands are the product of modern slavery; but the complexity of the supply chain – with fashion brands having on average over 200 suppliers – renders difficult the identification and investigation of instances of slave labour. Because the textile industry is built on low-skill jobs, it relies on highly vulnerable low-wage labour force who have little bargaining power and work in extreme conditions in unsafe factories. While international firms are interested in cutting costs and pressure sub-contractors to reduce their own (i.e. workers’ wages), they sacrifice demands on workers’ rights. In turn, governments are reluctant to set working conditions that would drive production costs upwards by fear of losing markets – a particularly egregious outcome for countries such as Bangladesh, where the apparel industry accounts for 83% of total exports.

The global fashion industry is particularly cruel to children and women. Children are often considered to be well-suited to low-skilled labour and even preferred to adult workers for tasks such as cotton-picking, as a result of the belief that their small fingers will not damage the crop. The attractiveness of employing children, however, lies not only in technical advantages but also practical benefits, as children are unlikely to bargain for better working conditions or voice any sort of complaint. Gender discrimination is equally pervasive, with a high preference for female workers due to the persistence of cultural stereotypes on female passivity and submission, that in turn lead to sexual harassment and abuse.

Textile global supply chains have been previously described as ‘opaque’, with customers having poor or no knowledge of the workers, working conditions and specific location behind every garment in their closet. Following the introduction of the Transparency Pledge by a collation of labour and human rights groups, there is growing momentum supporting transparency in the supply chain, with the UK’s Modern Slavery legalisation which requires companies to publish a modern slavery compliance statement, but recent figures suggest that only half of companies required to file compliance statements under the Act have done so. But local or regional initiatives have been slowly forthcoming, such as Tamil Nadu’s recent implementation of a new law preventing trainee works in the garment industry from being trapped in apprenticeships longer than one year, a scheme which previously justified salaries below minimum wage and lack of job security and benefits coverage. Although practical steps such as drafting supply registers and raising awareness among garment workers as to their rights might prove effective in identifying instances of modern slavery, little can be done to actually protect victims without tackling the root cause of slave labour: poverty and lack of better opportunities. 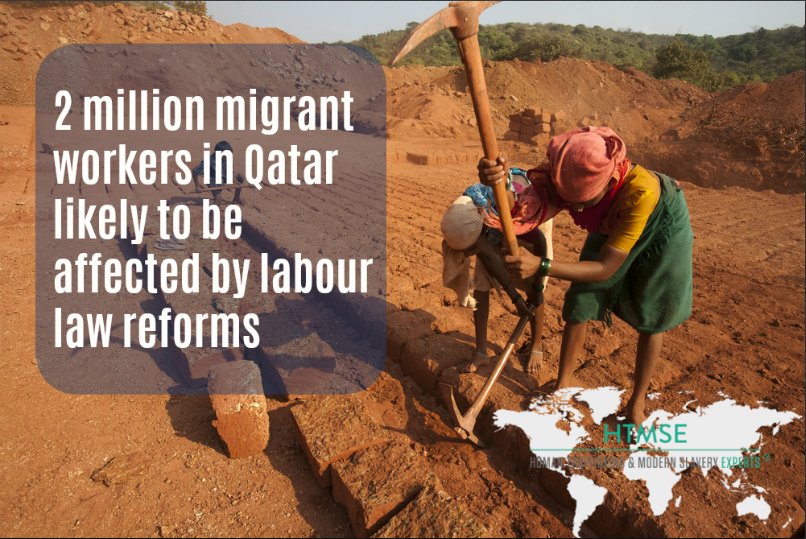 In addition to workers in the fishing industry and agriculture, construction workers are among the most highly vulnerable groups to modern slavery. In recent years, the issue has come under global spotlight after reports of the plight of hundreds of migrant workers at Qatar’s 2022 World Cup sites (Khalifa Stadium and Aspire Zone) working under extremely harsh conditions and for no pay.

Qatar’s award of the 2022 World Cup contract has resulted in an unprecedented demand in low-skilled workforce – and with foreign workers accounting for 90% of Qatar’s workforce, in the flourishment of recruitment agencies abroad. The offer of promising salaries and the possibility to send remittances home easily persuade thousands of Indian and Nepalese workers to pay substantial commissions to the agencies, only to later find themselves exploited and underpaid. Among the many abuses suffered by workers, deceptive recruitment, inhumane working and living conditions and irregular or non-existing payment of wages are those most commonly disclosed. The gravity of the labour law violations resulted in the death of 1,800 migrant workers in the three years preceding 2014, leading the ITUC to predict the death of further 7,000 workers before the start of the World Cup.

Despite having introduced laws preventing employers from withholding their employees’ ID and travel documents, a loophole remains by which employers may legally keep their employees’ passports with the latter’s written consent, which may well be obtained under duress. In addition, the kafala sponsorship system in place prevents workers from changing jobs when in Qatar or leave the country without their employer’s consent. Artificial changes to the law have been made, but employees are still required to obtain their employer’s permission to look for alternative work or leave. Lastly, employees are deterred from reporting any violations to the relevant authorities for fear of reprisals.

The issue is compounded by several local shortcomings, such as the lack of corporate due diligence to identify these abuses, the lack of monitoring of small sub-contractors by the relevant supervisory authority and abuse of self-reporting processes. But as a consequence of the international reputation of the World Cup, the responsibility to prevent labour exploitation not only lies with domestic institutions, but with FIFA itself. However, a recent Amnesty International report on the issue has found FIFA’s reaction and investigations to be precarious at best, leading a Dutch union to sue FIFA in Zurich in order to compel the organization to adopt ‘minimum labour standards’ for migrant workers – a claim that was subsequently rejected.

In order to end these violations, responsible actors at all levels must be held accountable – from recruitment agencies in third countries profiting from misrepresenting terms of employment and domestic authorities at construction sites failing to identify and prosecute labour abuses, to the international organisation under whose aegis the abuses occur.

The fishing industry is one where modern slavery has remained pervasive despite increasing public awareness and advocacy. Thailand, whose seafood industry is worth $7.3bn a year, has been the object of scathing criticism due to widespread evidence confirming the presence of human trafficking, forced labour and human rights abuses in fishing boats across the country.

Ninety percent of the Thai fishing workforce is made up by migrant workers from Burma and Cambodia, often trafficked across the border and lured to fishing vessels under false promises of regulated work. They are sold by brokers for as little as £450, committing themselves to harsh and often inhumane work conditions for an indefinite length of time, trapped in the vicious circle of trafficking and re-trafficking. While at sea, severe instances of abuse and even murder go unreported and unpunished, an issue compounded by complex questions of country jurisdiction and poor licensing and registration of many vessels, whose entire activity and crew is swept under the radar.

Unsurprisingly, the extent of the modern slavery issue in the fishing sector in Thailand has been the subject of international backlash. In April 2015, the EU issued a “yellow card”, threatening a ban on seafood imports unless Thailand improved its record of illegal fishing and labour abuse. Standing to lose up to 1bn in revenue per year, the Thai government was quick to adopt an illegal, unregulated and unreported (IUU) fishing enforcement act in line with EU regulations, labour laws preventing minors from working on boats and in seafood processing factories and a command centre to combat illegal fishing (CCCIF) which has now signed several memoranda of understanding with key companies. These efforts were rewarded by an upgrade in the 2016 US Trafficking in Persons Report from Tier 3 (the lowest ranking) to Tier 2, and a jump of 21 places in Verisk Maplecroft’s 2017 Modern Slavery Index.

Despite these improvements, in March of this year the International Labour Organisation held in a formal yet highly unusual ruling that Thailand was still failing to protect migrant workers, who were unpaid and abused. The ruling, informed by interviews of Thai migrant workers, showed that domestic authorities are far from achieving compliance with international labour standards. However, local efforts to stamp out modern slavery in an industry 90% of which is destined for exports are unlikely to ever be sufficient. The US, UK and EU, prime buyers of Thai seafood, have a key role in using access to their markets as leverage to achieve the elimination of human trafficking and modern slavery – a strategy which has clearly worked in the past.