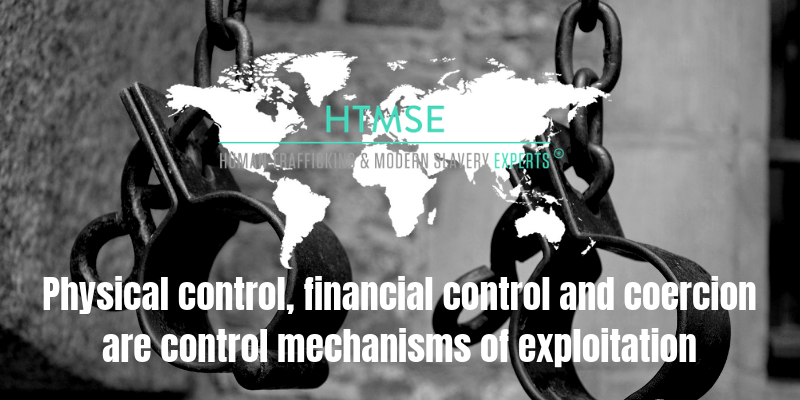 Modern slavery differs from the historic notion of slavery that implicates a restriction of ones freedom by chains and shackles, or more broadly control of another human being via physical or legal ownership. Although physical control still exists in illegal instances, the term ‘modern slavery’ encapsulates all forms of exploitation that happen to this day, and there are different control mechanisms that replace the physical handcuffs. The GLAA highlights three broad categories that often overlap: physical control, financial control and coercion that are used to restrict freedom and exploit people.

Physical Control
Despite the Universal Declaration of Human Rights declaring slavery illegal, there are cases where it still occurs through force or violence. For example in the UK, the infamous Rooney case where 18 workers were trafficked kept captive, working for little to no wages, physically abused, and in one case forced to ‘dig ones own grave’ if he did not agree to sign a contract for a lifetime of servitude.  Furthermore, a slave auction of migrants captured in Libya was brought to international media attention earlier this year, highlighting the extent to which people are being exploited under the mechanism of physical control in societies all around the world. In many cases, physical control can be exercised by confiscation of ID, passport or critical legal documentation, restricting the victims’ ability to leave their country of exploitation.

Financial Control
Financial control is an ever growing control mechanism of exploitation in modern societies. This may manifest in the form of debt bondage, where individuals or families give all their money or sell their assets to receive a false service or unjust return on their investment, either by deceit or out of desperation. This form of debt bondage is designed to be a life sentence and impossible to get out of due to the crippling interest rates, hence individuals must keep on working for free to ‘pay it off’. Forms of financial control are commonly being used to keep people in captivity by fraudulent trafficking and exploitation perpetrators. They may inflict on their workers undue or unreasonable fines, they may withhold their earnings, and or set up bank accounts which the worker cannot access often by taking advantage of language barriers. Many cases of this can be seen of Eastern Europeans having being trafficked to the UK and exploited for no or little wage, such as in the waste processing and construction sector.

Coercion
Coercion, blackmail and deceit are used to recruit victims into a position of exploitation, or to maintain their slavery sentence. This can come in many forms, overlap with physical and financial control and may be perpetrated by family or friends of the victim rather than an external exploiter. Common cases of blackmail can be seen by Vietnamese women trafficked to work in massage parlours and end up being sexually exploited, who may be blackmailed by their traffickers to keep on working or receive family ridicule and shame for the nature of work (they have been forced into). In many cases, blackmail is used against the victims to stop them from running away and reporting to authorities, which poses problems for victim support services having being freed from their situation of exploitation.

Furthermore, coercion to enter situations of exploitation may be inflicted by families for traditional or cultural practices, rather than an external perpetrator. This may be seen through situations of Female Genital Mutilation (FGM) or forced marriage. A particular example is a tradition in southern Nigeria’s Becheve community called “money marriage” where young girls are being used as currency to repay debts of family debts.

Modern slavery is an issue that takes many forms of exploitation where control mechanisms and tools of manipulation are constantly changing and evolving as legislations and sanctions tighten within each contexts. In order to address this, it is important look beyond the obvious signs of physical control to collect vast and accurate data to protect future vulnerable victims of exploitation.