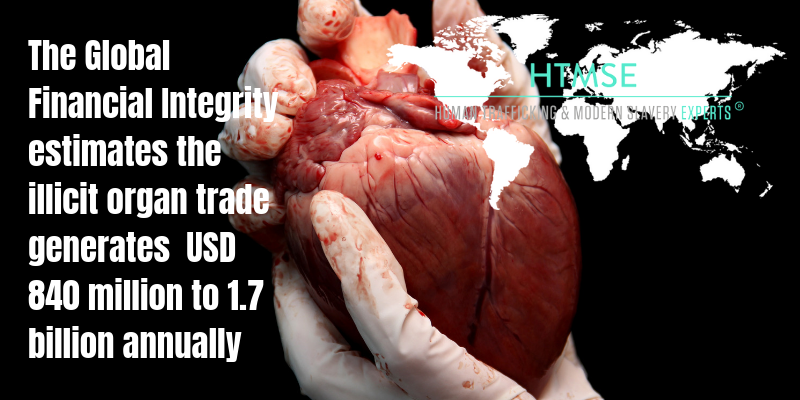 Since the life saving medical phenomena of organ transplantation was developed, the value in which people will pay for functioning organs has been recognised by global crime rings. With the new medical capacity comes an increasing demand, and therefore increasing profitability of organs for transplantation. Faced with a major scarcity in organs versus the demand for them, the black market for organ trafficking and trafficking in persons for organ removal rose at the beginning of the 20th century.

Illegal transplantation is a highly dangerous and exploitative practice, leaving the victims often with a lifetime of health consequences. The WHO estimates 10% of global organ transplantations are illegal each year. With a growing market, it is estimated the organ trade generates  $840 million to $1.7 billion annually, according to Global Financial Integrity. These estimates are due to the illicit nature of the crime, it is impossible to account for unreported cases – a dilemma that leaves enforcement fairly low. Relative to the legal demand and supply of organs however, kidney transplantation is significantly most common on the black market. The WHO estimates 10,000 kidneys are traded annually, followed by liver, heart and lung transplantations.

According to Article 3(a) of the Trafficking in Persons Protocol ‘Trafficking in persons’ shall mean the recruitment, transportation, transfer, harbouring or receipt of persons, by means of the threat or use of force or other forms of coercion, of abduction, of fraud, of deception, of the abuse of power or of a position of vulnerability or of the giving or receiving of payments or benefits to achieve the consent of a person having control over another person, for the purpose of exploitation. Exploitation shall include, at a minimum, the exploitation of the prostitution of others or other forms of sexual exploitation, forced labour or services, slavery or practices similar to slavery, servitude or the removal of organs’.

However the terms trafficking in organs or organ trafficking is not included and therefore treated as a crime to be dealt with independently.

The practice of organ trafficking is distinct from other forms of human trafficking due to the distinct feature of technical medical ability needed to undergo the procedures, particularly if the organ donor is living. This makes it difficult to understand and trace if legal professionals become involved. With ethical and moral implications of this practice at all stages, it must be undergone in strict legal manor. However, standards of patient privacy are likely to prevent medical professionals from reporting patients with an illegal organ. Yet regulations for physicians include transparency with patients, and a framework for reporting colleagues involved in illegal transplantation.

Bound with ethical implications, legislation must safeguard the reporting practice of medical practitioners that come into contact with illegal organs. Furthermore, it is clear that a dedicated international convention is required to further encompass a definition of organ trafficking. This must include guidance on the criminalisation, prevention strategies, victim care recommendations. Targeting the financial sector for a transaction trail is a potential way to regulate this practice.