More than 15 million people were enslaved in Africa and sold during the Transatlantic Slave Trade, which constitutes the largest legally sanctioned forced movement of people in history. Spread over 400 years, 96% of those enslaved arrived in the Americas and remain a prominent foothold in the demographic. This year being its 70th anniversary, the Universal Declaration of Human Rights remains a foundation document in international law and slavery legislation:

“Article 4. No one shall be held in slavery or servitude; slavery and the slave trade shall be prohibited in all their forms.’’

United Nations Secretary-General António Guterres acknowledges this and makes a tribute to International Day of Remembrance of the Victims of Slavery and the Transatlantic Slave Trade this week on 25th March. Denoting this period as one of the most brutal and shameful eras in human history and remembering those who died and suffered, he aims to spread the message of equality and remind of the ‘dangers of racism and prejudice’ in social thought. Although modern slavery has changed form and means, much of our understanding is grounded in the history of the Transatlantic slavery era.

For the full tribute on the Victims of Transatlantic Slave Trade read here.

Climate change increases the likelihood of natural disasters, forces groups of people into migration or resettlement from their original territory, and leaves people homeless, which are all high risk circumstances for trafficking. Environmental conditions should be a key factor in assessing socio economic wellbeing and security of a group of people against displacement, and in turn exploitation.

In contrast to refugees of war where majority of people that have been migrating are of middle or upper class, when faced with environmental catastrophe they may be pushed into a position of desperation and share the vulnerabilities if the poor. Through a sudden disaster, people may be thrust straight into poverty if all their assets, property and potentially lives are lost as there is often no safety net for unpredicted catastrophes. This shock and rapid displacement of people often attracts new traffickers to the affected area or encourages systems and crime rings already in place. As people are heavily dependant on their surrounding environment, they are suddenly put into situations of desperation for work people become targets for labour abuse or slavery. There is also risk of people becoming involved in the trafficking itself as a way to make income. This of course perpetrates the issue while bolsters the trafficking business in a disaster stricken area.

In slow onset environmental changes, such as sea level rise or temperature change, a similar trend occurs when it leads to forced migration. Traffickers may look to regions where recourses may be scarce or environmental changes cause a change in labour demand. For example drought causes the movement away form agriculture and into more industry driven roles in urban areas, giving traffickers a window for recruitment. Furthermore significant trafficking is seen at host regions or places of settlement, such as in urban slums. Often with very minimal beginnings, little education, work experience in cities or knowledge of their rights, migrants are mislead by ‘agents’ into exploitative work.

Women, men and children all face different risks to environment induced migration. If hit by disaster, children may be orphaned and at high-risk without the care of their parents, as seen after the 2004 Ocean Tsunami in South East Asia as records of child ‘abductions’ in Indonesia were much higher. Women are most often recruited for domestic work or sexual exploitation whereas men are most often forced into labour in inhumane and exploitative conditions. Such work is often in poor environmental conditions, including recourse extraction and dealing with toxic substances, for example palm oil extraction in south East Asia. This constitutes an abuse of their human rights and furthermore contributes to the supply chain of industry pollutants that cause climate change.

To combat this issue, there needs to be acceptance of the link between these climate change, migration and trafficking. There is need for awareness to be raised and regulation in times of disaster and on going migration, as the IOM monitors trafficking rates through their Migrant Crisis Operational Framework. National policy should avoid restriction of the movement of people, because this will push traffickers further underground or into the black market where exploitation thrives. Environmental migration should be regulated as a coping mechanism for victims, which requires international cooperation.

There has been significant movement in Australia this week around the introduction to the Modern Slavery Act for Australia in 2018. This is being viewed as “historic legislation” as it pushes for nuanced supply chain based solutions involving individuals, business and public sector commitment, rather than the previous criminal justice perspective.

The major issues businesses have faced are in allocating resources and having limited education on addressing modern slavery in their supply chains. The new regulations are designed to avoid profit loss, but businesses will be accountable and at the forefront of addressing this issue. To comply with the new legislation, they will have to report on their efforts to eliminate modern slavery. Slavery will become an issue discussed by top management or Board Members of businesses rather than simply CSR efforts.

Technology is being developed to assist in these processes, including the block-chain systems, which document every valid contract in a supply chain. However, active commitment from the top-tier stakeholders is ultimately essential to address modern slavery through on going enforcement.

Modern slavery is a severe national issue with 4,300 living in this condition according to the Global Slavery Index, and a widespread issue amongst Asia-Pacific. Experts including Luis C deBaca, are viewing this as the opportunity for the Australian government to be a regional policy leader in addressing the on going problem.

Human trafficking has become one of the three largest organised crimes, along with small arms and drugs trade which all monopolise on the displaced people of the refugee crisis. Gangs already involved in trade of illegal substances exploit the opportunity in the modern slave trade that produces over $150 billion annually.

Modern slavery is a global issue, Nobel laureate Kailash Satyarthi highlights the highest number of slaves per country are in India, with over 18 million current victims. Europe’s refugee crisis exacerbates numbers, as approximately 10,000 lone children have been reported missing since entering the EU according to Europol data. In order to prevent their daughters being sold into slavery or for commercial sex, families of Syrian refugees are being pressured to arrange child marriages.

This month Laureates and Leaders for Children Summit 2018 is an international summit on Child Rights addressing the nexus between gangs, refugees and modern slavery. There is an emphasis on technological advancements such as facial recognition for missing children, as well as tighter enforcement amongst gangs involved in refugee migration and education amongst vulnerable victims to address the root causes.

For further information on exploitation of the refugee crisis by gangs see here. 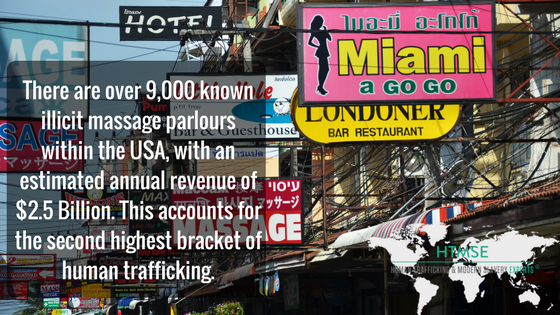 Workers ​in illicit massage parlours are often criminalised or punished for a job they may have been forced into. While some sex workers make the conscious decision to enter the line of work, many within the illicit massage business are victims of human trafficking and therefore work under conditions of force, coercion, fraud and deceit. Due to the underground nature of the business, crime lords and business owners have the ability to protect themselves and their own identities amongst the vast network of people involved. This poses a major issue as employees lower in the supply chain bear the consequences, on top of working under inhumane conditions.

Trafficking cases within massage parlours accounted for the second highest bracket in the USA in 2017, (to escort services as the first) with 2,949 out of 32,000 cases of trafficking recorded by National Human Trafficking Hotline. There are over 9,000 known illicit massage parlours within the USA, with an estimated annual revenue of $2.5 Billion.

However, these figures are a small estimation in the total scope of the problem. Naturally it is a crime that is difficult to quantify, as victims often do not know they are being taken advantage of or are manipulated into keeping quiet​, through threats and control mechanisms​. The victims are statistically most often women from China or South Korea, in their 30s-50s who have had children, speak very little English and are in positions of debt or financial pressures, in which they would have been taken advantage of by seeing this opportunity.

The perpetrators may use these vulnerabilities to fraudulently or deceitfully recruit women. The recruitment advertising often hides the sexual element of the work and also understates the pay, leading victims into debt to their traffickers. In addition, they may use coercion, legal and emotional manipulation, cultural shaming or deportation threats to force victims into commercial sex on an on going basis. Typical scenarios may be when women are told these circumstances are “normal in the USA” or “police are corrupt and will not help them”, or using blackmail by threatening to tell victim’s families of their sexual experiences. Their access to money, communication and national identification are most often confiscated.

The underlying cause of illicit massage businesses is to feed larger crime networks. ‘Front’ businesses are operated, including nail salons and laundromats, in order to launder money through and move victims between. However customers who engage in this business create the demand and therefore sustain the business.

According to the Polaris Project report, there are some obvious indicators as to which parlours are operating commercial sex, even if they do not openly advertise it. If they do, they promote to primarily male clientele through online sites such as Backpage.com and Craigslist. They will typically offer lower market price reflecting the wages of the women, if any. There will be private presentation of the business, often with windows covered and locks on doors with buzzer entry only. A significant indicator of trafficked victims is when the women live on site of the parlour.

The most effective way of combating trafficking in the massage industry is effective and local-national scale legal framework, with increased risk for the traffickers themselves rather than their employees forced into criminality or prostitution, with thorough law enforcement and consistent regulation. In the USA, 46 states reference industry standards for massage orientated businesses, yet these are usually only regulated on county or city level. Business operations including open hours, profit transparency, landowner responsibility should be enforced, and online advertising banned. On a broader scale, cross-state investigations into trafficking and crime rings should aim at the root of the issue, as well as avoiding media framing of ‘sex workers’ as the criminals rather than victims.

Traffickers will take opportunities to exploit vulnerable people, and natural disasters create high-risk scenarios. Traffickers target homelessness, and hundreds of people are left homeless with their property, lives and families exposed to recruiters. Tragically, rescue centres become a common point for traffickers to target, according to survivors in the Southern USA states of Texas, Louisiana, and Florida who periodically experience hurricanes.

According to the Southern Poverty Law Centre “one of the largest labor trafficking cases in United States history resulted from human trafficking that occurred in the aftermath of Hurricane Katrina”. The higher demand for labour in the clean up and reconstruction of the affected area led to 5 men being recruited by traffickers and eventually paid out $14 million.

The threat of crime and exploitation needs to be built into the emergency and resilience strategies of societies against natural disasters. There is an abundance of agencies and organisations prepared to assist in disaster response, who must partner with local law enforcement and civil service to create awareness around human trafficking and protect the vulnerable against exploitation post disaster.