The trafficking of young girls between Myanmar and Singapore is again brought to international attention, as the media exposure in 2016 failed to prevent the on going practices which were perpetrated through Myanmar government employees.

Since 2014 Myanmar made illegal female domestic work abroad, however reports suggest that recruiters are still practicing in rural areas. They promise families better opportunities if their daughters are sent to be maids in Singapore, ignorant to the illegality and risks involved.

Cases at a Singapore trafficking shelter exposed one case of rape, one of physical abuse, and a girl who ran away from her male employer who requested showering with him. There is a clear pattern of girls around the age of 15 still being trafficked from Myanmar, leading to several incidents during 2017. A 15 year old girl allegedly committed suicide by jumping from the balcony of her employers apartment just two weeks after arriving in Singapore, and shortly following a second girl returned back to Myanmar with severe injuries from attempted suicide.

This victim reported to officials the identity of the recruiter who was a member of Myanmar’s parliament and director of company Myanmar Global Manpower Link which continued operation of maid recruitment at least two years after it became illegal in 2014. Reports suggest he was involved in trafficking over 60 underage girls from Myanmar to Singapore. Corruption on Myanmar boarders means age documentation is altered to meet the Singaporean legal age of 23, in which the defendant Louis Zung admitted. However he denied any wrong doing by trafficking and according to the Myanmar community, agents who recruit girls for domestic service are seen as ‘benefactors’ assisting in lifting poverty, rather than being blamed for tragedies.

However the economic desperation of the victims’ families conceals the deep rooted issue of rights violations through trafficking and and unjust labour. Due to the corruption linked to the government of Myanmar, it seems exposure and criminalisation is not enough to stop this practice. The trade policies between Myanmar and Singapore need to be internationally regulated and sanctioned to address this.

For the full article on Myanmar to Singapore maid trafficking, read here.

Recent investigations have suggested that over 150,000 North Korean citizens are sent to work abroad in Poland, Russia and China in conditions alluding to ‘slavery’. The revenue produced is estimated over $1 Billion USD per year, the majority of which is funnelled back to North Korea to finance the dictatorship regime of Kim Jong-un.

In Russia, a worker anonymously reported that they are ‘treated like dogs here’ and they have to ‘give up being human’. They are paid over just $500 per month, of which almost all is paid to their North Korean ‘captain’, which is sent directly back to North Korea as ‘Party Duty’ or ‘Revolutionary Duty’. In Poland, around 800 North Korean labourers work primarily on shipyards, with extremely limited rights and substandard conditions. Although the company JMA denies having North Korean slave labourers, reporters were shown around the workplace and the ‘hotel’ in which the workers live on-site so they have no reason to leave. Furthermore, the Polish government suggests that all workers are under EU slavery regulations and there is no evidence of money being sent back to North Korea.

Defended in some respects as a positive system as workers are given the opportunity to have a ‘glimpse of the world’ when sent abroad to work, the conditions in which they are working is undoubtedly modern slavery. In December 2017, the UN sanctioned North Koreans working abroad with host nations having 2 years to comply, to prevent the finances fuelling the North Korean army, nuclear program and the luxurious living of Kim Jong-un.

With a hereditary system of servitude, Mauritania has previously demonstrated significantly low slavery prosecution rates. In 1981 slavery was deemed illegal, but the sanctions were increased in 2015 with punishment of 20 years imprisonment recognising slavery as a ‘crime against humanity’.

Two recent ground breaking cases in the country have led to the sentence of two guilty of enslavement to 20 years. The primary victim of this case died before the case conclusion, who alongside his son, were reduced to slavery.

Another defendant was sentenced to 10 years in prison for keeping three women as domestic servants a without pay. Although the defence put forward the argument of treating the servants ‘like family’, the court ruled that slavery is a crime no matter how ‘gentle’.

These verdicts mark significant progress in the slavery case law of Mauritania, marking the success of the legislation and the three tribunals to address modern slavery established in the country. Similar cases that have been pending for several years will be reactivated according to authorities, signifying the normalisation of human rights issues being upheld by law.

Read here for the full article on these Rare Slavery Rulings in Mauritania Sending Three to Prison.

Issues of slavery, sexual servitude and trafficking are embedded as financing means in wider terror networks. The revenue produced by these means is used to sustain terrorist organisations, including the likes of Da’esh, Boko Haram, Al-Shabaab and the Lord’s Resistance Army. Such financing means are being used to replace traditional fund raising. Instead slavery, weapon trafficking, sexual violence are increasingly used for money laundering to finance terror measures. This is engrained further due to the ideological justifications of sexual violence.

The total capital value of the slavery and sex market feeding on going terror networks is unknown. Some reports suggest kidnapping ransoms account for $10-30 million revenue to Da’esh in 2016. Other reports refer to a list they published, detailing ‘spoils of war’ including Yazidi women and children sold as sex slaves, virgins having been auctioned through social media for upwards of $12,000 each. Many accounts suggest terror soldiers use the promise of sex slaves in their recruitment process, and punishment of ‘non believers’.

In 2016 a specific Resolution 2331 of the Untied Nations Security Council was passed to address human trafficking within areas of armed conflict, recognising that these are ‘tactics’ for terror groups and are perpetrated mercilessly through the ‘strategic objectives and ideology’ of such groups. It states “that trafficking in persons undermines the rule of law and contributes to other forms of transnational organised crime’’. The UN Resolution 2331 encourages its member states to align their national policy with the wider intentions of Women, Security and Peace and the UN Convention against Transnational Organised Crime. It targets the financial mechanisms between trafficking, large crime rings in conflict zones and terrorism.

Illicit economies make it difficult to protect victims and identify and apprehend perpetrators. However slavery and sexual servitude are considered war crimes and crimes against humanity, which have universal jurisdiction under the Commonwealth Criminal Code, deeming the location and nationality of the defendants irrelevant. There is need for legislation to address this nexus, and for enforcement by international forces and agencies on the ground in conflict zones. The definition of terrorism in both national and international law must be broadened to include sexual violence as a tactic, amongst the wider UN resolutions on Women, Peace and Security. 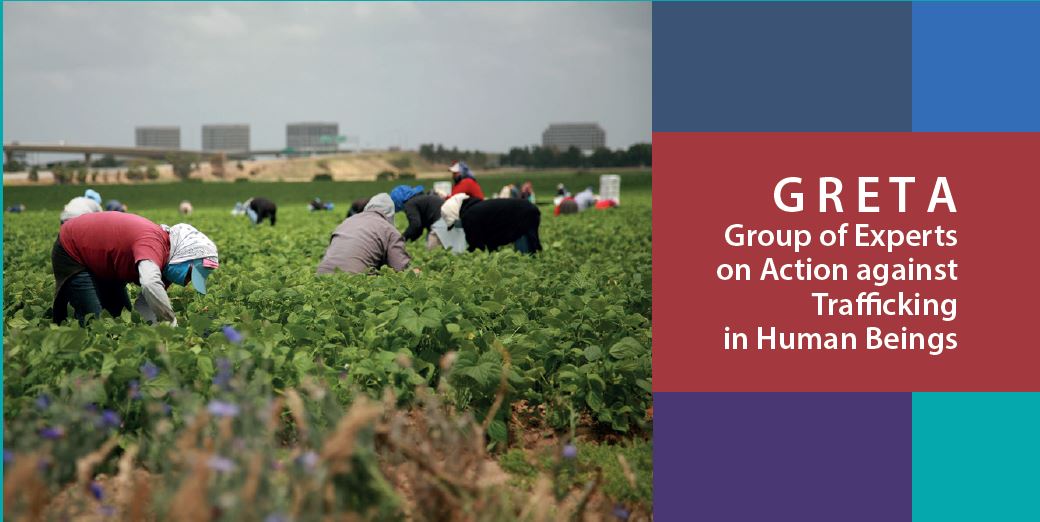 The Council of Europe has released a report through the Group of Experts on Action against Trafficking in Human Beings (GRETA) which suggests labour exploitation is now the most significant form of trafficking in Europe, reflecting the rising trend in recent years. Alarmingly, it has taken over rates of sexual exploitation in several countries, including the United Kingdom, Belgium, Portugal, Cyprus, Georgia and Serbia.

Due to this shift, men are the most identified victims of human trafficking, however women and children are still severely affected. ‘Men are often exploited in industries including agriculture, construction and fisheries whereas women tend to be exploited in more isolated settings such as domestic or care work – where they are sometimes victims of both labour and sexual exploitation.’

The primary cause of these new ​figures points to the previous underestimation of labour exploitation against sexual exploitation rates, as there is relatively less targeted legislation, and there have been few successful prosecutions and convictions. With both forms of exploitation, victims fear reprisals ​from traffickers, ​which makes data collection difficult, as well as impacting on low conviction rates.

For the full 7th Annual Report: G R E T A Group of Experts on Action against Trafficking in Human Beings, read here.