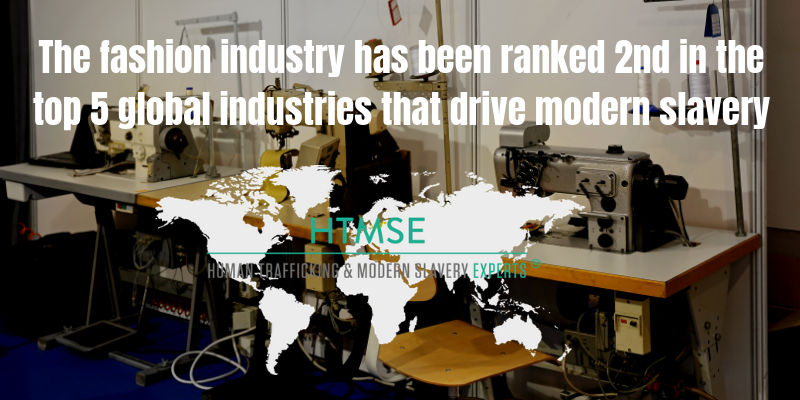 As the fashion industry makes increasing mark on modern culture and consumerism, the implications of cheap clothing are becoming further understood. Despite the lure of cheap apparel, there are hidden costs often in terms of a ‘human cost’ within the supply chains and production lines, unseen to the retail environment. The fashion industry has been ranked 2nd in the top 5 global industries that drive modern slavery.

Labour exploitation is endemic and inevitable with such competitively priced end products relative to the cost of production. Like other industries, there are 3 major stakeholder groups that must work together for a comprehensive modern slavery response – 1) government and legal bodies, 2) business owners and 3) consumers.

UK government action against modern slavery is at all time high, with 920+ live investigations underway in September 2018. According to the UK Modern Slavery Act, companies that turnover over £36 million are obliged to produce annual Modern Slavery Statements which detail how each company is regulating and addressing labour abuses within their supply chains, such as child labour, excessive working hours and inadequate pay. However, we are still seeing gaps in this legislation where the obligations conflict with business interests, who are battling for higher sales in a competitive fashion market.

The business owners of major fashion brands in the UK including John Lewis, M&S, New Look, NEXT, River Island and Shop Direct are stepping up towards tackling the issue as the industry is facing growing pressure from external groups. These 6 brands have made a new agreement to tackle modern slavery within the textiles industry by committing to work with law enforcement, including the Gangmasters and Labour Abuse Authority (GLAA) to address modern slavery within apparel supply chains. Their commitment includes raising awareness around worker abuses, protect at-risk and exploited employees, and root out modern slavery from their supply chains.

The top down government and legislation led approach to addressing labour abuses is critical, but falls short without compliance regulation and strict penalties. The competitiveness of the fashion market is continuing to overrule the moral obligation of many businesses to ensure supply chains are free from labour abuses. To thoroughly work towards eradicating modern slavery within the industry, there has to be a consumer led shift in the demand for low-priced unethical clothing, where major brands can influence through transparency and marketing campaigns for public awareness.

In 2016, 37,550 Nigerians migrated to Italy, and many more unaccounted for did not survive the journey. As the number of African migrants crossing the Mediterranean to reach Europe increases and anti-immigration pressure is growing in Europe, more and more migrants are pushed to take illegal and high risk means. Often without much knowledge of the situations migrants are getting themselves into, they put themselves or their families at extreme risk of human trafficking, exploitation, immigration detention, sexual abuse, as well as physical dangers such as dying at sea.

The organisations including the International Organisation on Migration (IOM), National Commission For Refugees, Migrants and Internally displaced Peoples (NCFRMI) and Nigerian agency mandated with preventing human trafficking (NAPTIP) have launched a joint initiative of public awareness raising around the risks of migrant vulnerability to trafficking through public radio. They will air real testimonies of returned migrants and trafficking survivors who attempted to cross the Sahara desert or Mediterranean sea, give government and UN expert’s advice as well “promote social cohesion and deal with the issue of stigmatisation of returned migrants” according to the IOM.

For the full article, Nigeria: Awareness-raising radio show on perils and opportunities of migration, launched by UN agency read here.