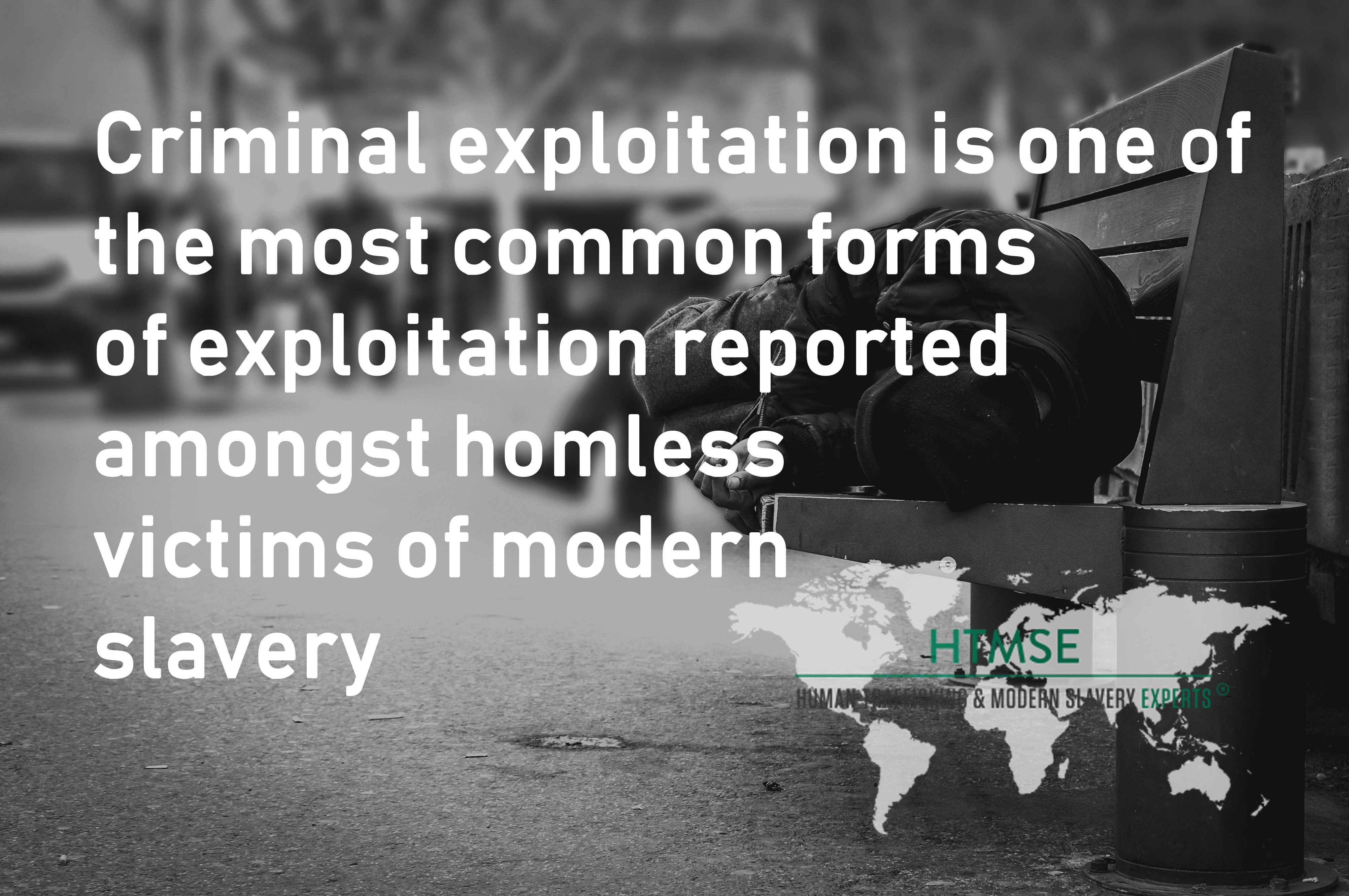 Homelessness continues to be a major risk factor for individuals’ becoming victims of human trafficking and modern slavery. HTMSE previously analysed the links between homelessness, human trafficking, and modern slavery, and the critical requirement for ongoing, long term support provisions. Homelessness itself leads to an individual having an increased visibility to potential exploiters and therefore an increased vulnerability to becoming a victim of modern slavery. However, homeless individuals can have a range of complex vulnerabilities beyond their homelessness that may include mental health problems, substance addiction, and physical health problems.

Throughout 2019 there was a marked increase in awareness of homeless individuals being approached at soup kitchens, night shelters, and ‘drop-ins’ where they are deceived with promises of work and income. Specialist Modern Slavery and Homelessness organisations, both governmental and non-governmental, have stated that individuals who are homeless are being specifically targeted for exploitation, which in many cases takes the form of criminal exploitation; where the victims are forced to commit crimes. In the case of victims who are homeless, the modern slavery charity Unseen found that the criminal exploitation is most commonly in the form of forced begging, though their exploitation may also involve being forced to commit theft, deal and/or produce drugs, or a number of other criminal acts. Victims of criminal exploitation may be arrested, charged, and even prosecuted and imprisoned for the crimes they have been forced to commit before being formally identified as victims of modern slavery and/or human trafficking and receiving appropriate support. HTMSE has provided extensive training on this area throughout the UK and world.

Criminal exploitation and forced criminality has been an area that has received substantial attention recently across the counter-trafficking and anti-slavery sectors and mainstream media, most notably in the context of ‘county lines’ drug dealing operations. Increases in awareness and guidance for addressing criminal exploitation across law enforcement, legal and local authority professionals; the prevalence of modern slavery and human trafficking across various industries such as the hospitality industry, and in particular new models in the hospitality sector such as ‘AirBnB’; and the links between homelessness and modern slavery, can all be considered positive shifts towards the development of effective strategies to combat modern slavery and human trafficking across society. However, in the context of homelessness and modern slavery individuals may swiftly become trapped in cycles of exploitation. As discussed in HTMSE’s previous analysis of homelessness and modern slavery, victims of modern slavery and human trafficking are at an increased risk of becoming homeless without appropriate long term support in place, and homeless individuals have an increased vulnerability to potential exploiters.

The circularity of this issue remains a clear demonstration that a comprehensive multi-sector response is needed to effectively tackle these issues. 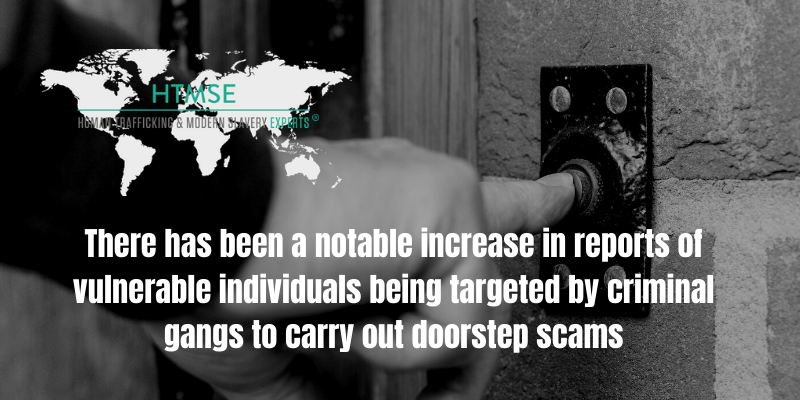 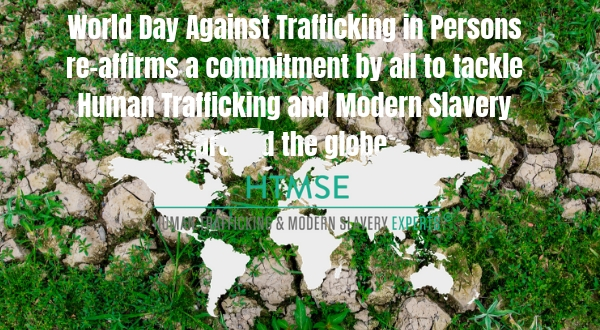 The world day against trafficking in persons was held on the 30th July 2019. The day is designated by the United Nations as a moment to reaffirm commitments to tackle human trafficking, support victims, and protect those at risk globally. Human trafficking is an exploitative crime that targets men, women, and children for a variety of purposes, including forced labour, sexual exploitation and organ removal. In 2000 the United Nations opened for signature and ratification the Protocol to Prevent, Suppress and Punish Trafficking in Persons Especially Women and Children, supplementing the United Nations Convention against Transnational Organized Crime, commonly known as the Palermo Protocol. The protocol delivered an internationally accepted definition of human trafficking as:

…the recruitment, transportation, transfer, harbouring or receipt of persons, by means of the threat or use of force or other forms of coercion, of abduction, of fraud, of deception, of the abuse of power or of a position of vulnerability or of the giving or receiving of payments or benefits to achieve the consent of a person having control over another person, for the purpose of exploitation. Exploitation shall include, at a minimum, the exploitation of the prostitution of others or other forms of sexual exploitation, forced labour or services, slavery or practices similar to slavery, servitude or the removal of organs.

It is increasingly recognised that tackling human trafficking and modern slavery, crimes that are often of a hidden nature, requires multi-agency collaboration and professional experts from across all sectors. The Human Trafficking and Modern Slavery Expert Directory was established in the UK to bring together professionals and specialists who work in the counter-trafficking and anti-slavery sectors from around the world. Victims of human trafficking can be transported within their own country or across borders many thousands of miles from home. The directory addressed a critical need for a centralised global database of experts and professionals to better enable those working in the field to approach an incredibly complex, often international, problem. The HTMSE directory lists a large cross section of professionals and organisations, all of whom have different specialisms and varying qualifications, including  NGOs, charities, businesses, lawyers and law firms, medical practitioners and researchers. The directory is designed as a free resource for all, whether signing up to the directory as an expert or searching the directory in search of an expert.

In 2015 the United Nations presented the Sustainable Development Agenda, which included a target of ending human trafficking and modern slavery by 2030, which according to a recent study is far from being met. However, whilst this year’s World Day Against Trafficking in Persons focused on calling governments around to world to action it also promotes action by all.

If you are a you are a professional, NGO, charity, business, lawyer, medical practitioner, or other expert or specialist organisation and wish to sign up to the Human Trafficking and Modern Slavery Expert Directory and professional network please follow the link here.